Around the turn of the century, Robert McClure Snyder, a prominent Kansas City businessman, learned of the beauty of the Ha Ha Tonka area and journeyed there. He was so impressed with its rugged grandeur that he began purchasing much of the surrounding land and eventually acquired over 5,000 acres.

He hatched the dream of building a private retreat that would rival European style castles. He imported stone masons from Scotland and a European supervisor was hired to ensure authentic construction techniques. Kansas City architect, Adrian Van Brunt, designed the three-and-a-half story masterpiece. A central hallway rose the entire height of the building.

In addition, a stone stable, an 80-foot-tall water tower and nine greenhouses were built on the estate. The stone and timber used in construction were taken from the immediate vicinity and hauled by mule team. Construction of the complex began in 1905.

But for Snyder, Ha Ha Tonka remained only a dream. In 1906, he was involved in a car accident on Independence Boulevard in Kansas City and was killed (he was one of the first automobile owners in the city). The interior of the castle remained unfinished until 1922 when Snyder?s sons, Robert Jr., Leroy and Kenneth completed the upper floors of the building.

The Snyder family then faced years of adversity in trying to keep Ha Ha Tonka in the family. They were forced to sell Snyder?s natural gas supply business to Eastern interests. A long, legal battle against Union Electric ensued over the waters of the Lake of the Ozarks that were encroaching upon the natural spring-fed lake at the foot of Ha Ha Tonka cliff. They finally leased the mansion to a Mrs. Ellis who operated it for several years as a hotel.

In 1942, all the dreams came to an end. Sparks from one of Ha Ha Tonka?s many fireplaces ignited the roof and within hours the huge castle was gutted, as was the stable. What remained were the stark, devastated outside walls that still brood on the edge of the cliff. The State of Missouri purchased the estate in 1978 and opened it to the public as a State Park.

It contains over 3,600 acres on the Niangua Arm of the Lake of the Ozarks and is located five miles southwest of Camdenton on State Road D. There are 12 hiking trails (16 miles total) of various length?which take you to such places as Devil?s Kitchen and Turkey Pen Hollow?and there are 8 known caves. The park has numerous picnic areas, two of which are shelters that can be rented for events and a playground. A Trail and Natural Area Guide is available at the visitor?s center at the park entrance, along with outside exhibits. Visitors for the day can easily arrive by boat or car. (No overnight camping.)

The natural surroundings equal the impressiveness of the ruins. Geologically, the area is an example of ?karst? topography, characterized by sinks, caves, underground streams and natural bridges. Huge caves have collapsed and created a large theater-like pit known as the coliseum. Legend has it the coliseum was used for Native American tribal meetings. One of Missouri?s largest springs is located in the park and feeds an average of 48 million gallons of water a day into the Niangua Arm of the Lake. 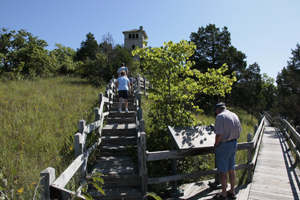 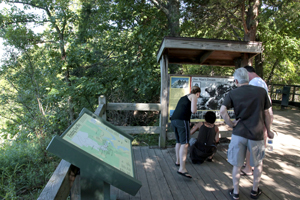